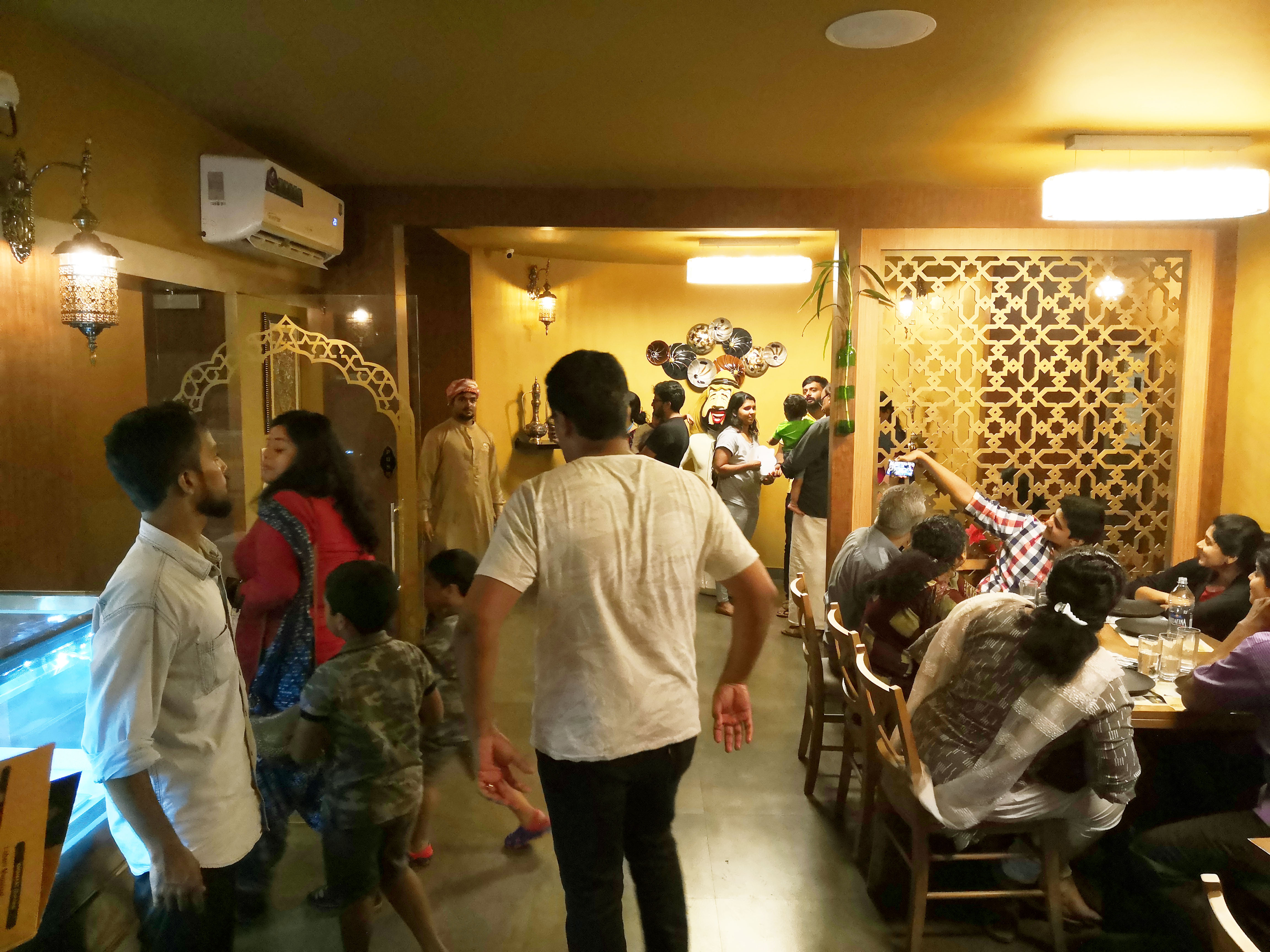 If there’s one sector that has remarkably evolved over the years, that would be the Food & Beverage Services (F&B) retail industry. The Indian Restaurants & Food Services Industry has been subjected to phenomenal growth for the past two decades and continues to grow at a rapid and healthy pace.

The CareRatings report on May 2019 says that the market size of the Indian F&B industry is around 3.7 trillion. It expects a CAGR growth of 10.4% for the next five years to reach 5.5 trillion by 2022. Major players in the F&B sector have established themselves in the metros and are expanding to the tier 2 & tier 3 cities, as there is huge market potential.

Trivandrum in its early days had limited fine dining options with fewer varieties. But the last five years saw a considerable change in the city’s F&B sector, with an explosion of food varieties and cuisines coming up. Major reasons for that are the growth of a highly aspirational middle-class community with high disposable income, urbanisation, growth of internet & advancements in technology.

Evolution of the ‘dine out’ culture

The eating-out culture in the city was uncommon in the early days. The early ’70s just had tea shops, which were mainly the gathering place of labourers and working men. The ’80s saw the growth of Indian Coffee House branches that served to be hangout destinations of the then youth. The late ’90s & early 2000s saw the growth of QSRs and eateries, that bought in major disruptions in Trivandrum’s eating habits. Saraswathy Nagarajan, a journalist working at The Hindu, writes extensively on lifestyle and food. She is also a native of the city and has closely observed how the F&B sector evolved here.

“I feel that Kalavara(the old one) & Ambrosia were the places that bought the dine-out culture to the city in the ’90s, which introduced a very different food culture in terms of menu, ambience, serving style. The last ten years saw an explosion of flavours in the city. And the two reasons for this are the growth of Technopark & a very mobile population, who travel around the world & bring back global ideas and cuisines. The popularity of small scale restaurants like Afsal, Vazhiyorakada, Usthad Hotel & Rajila in the city’s outskirts show how people are willing to drive far for good food. The city needs more of a specialised restaurant culture, that celebrate the diversity of ethnic Indian food & can cater to a mixed audience.” says Saraswathy.

The increasing popularity of ‘fine dining’

As per September 2018 report of Kerala Food Safety Authority, more than 90 hotels & 375 restaurants were issued new licenses. The surge in the number of hotels shows how people especially millennials have welcomed the dining out culture. Over the years, Trivandrum’s F&B sector has evolved so much into a diverse and global one, that can accommodate mixed culinary preferences. The diversity expands not just to Arabic & Chinese, but also Continental, South East Asian, Italian, Turkish & many other global cuisines. Fine dining hotels like Villa Maya, Hilton Garden Inn, Taj Vivanta, Leela Raviz, Hycinth, Apollo Dimora and restaurants like Barbeque Nation, Atelier by Ambrosia, Gourmet House, Monte Nero have bought in a revolution by offering great ambiences & diverse menus, with many of them even having premium facilities like private dining, rooftop restaurants and bars.

A decade back, Trivandrum just had a handful of restaurants like Pizza Corner, Ambrosia and Kalavara, that served Western fast food dishes. But the last few years saw several fast-food joints like KFC, Chicking, Subway, SFC plus, Domino’s Pizza, Oyalo and Pizza Hut opening multiple branches in the city. Various other joints like Sijis Pizza Street, Pondis Pizza Hub offer a new perspective from the American joints by experimenting with thin crust wood-fired pizza. Also, the arrival of Mall of Travancore bought McDonald’s and many other joints like Taco Bell, Keventers, Belgian Waffle, Nagas, and Kailash Parbat  to the city.

How about having scrambled eggs, waffles, french toast and sausages for breakfast at a place where one can also gather, relax, read a book or enjoy a song? The city has numerous options for people who wish to satisfy their occasional European cravings. Fuel in Kuravankonam, Supreme Upper Crust in Kowdiar, Coffee Savoury in Sasthamangalam, 1976 in Statue, Old Coffee House in Shangumugham, Cofi Club in Kesavadasapuram, Entree in Kuravankonam, Cachette cafe at Murinjapalam, Coffee Savoury at Sasthamangalam, Cafe Sarwaa & Kaffeehaus at Vazhuthacaud are some of the cafes that aspire to be perfect hangout destinations for the young and old alike.

Nimmy Rolythan Pereira runs Kaffeehaus- an European cafe at Vazhuthacaud. Her venture has also won the Metro food awards for the city’s best European Cafe. She believes that Trivandrum’s market has transformed itself into a fully functional & self-sufficient one.

“The café culture among the crowd has boomed from being a ‘once in a while’ to ‘almost every day’, which indeed was a blessing in disguise. And Trivandrum being a city that accommodates multicultural and a speciality food-loving crowd, a European cafe is like a feather in its cap.” says Nimmy.

The advent of Technopark & the IT industry largely influenced the overall growth of Trivandrum, especially Kazhakootam. The growth of major MNCs’ brought in a lot of people from different parts of the country for work. Gradually, a lot of eateries came up which could address the culinary requirements of a diverse crowd.

One of the key factors for the surge in the city’s f&b sector was the advent of online food delivery apps like Uber Eats, Swiggy and Zomato. These platforms opened up huge possibilities in the sector- by bringing most of the restaurants together & enabling people to relish their favourite delicacies at ease. Moreover, it also employed hundreds of local youth as delivery executives.

Nithin Sisupalan is a business journalist, a well-known foodie, who also co-owns The Reading Room Consultancy along with his wife Archana Gopinath. He feels that the food culture in the city has undergone a major explosion & has started showing signs of maturity from the second quarter of 2019.

“The advent of food groups and delivery services did help sprout a number of joints. However, specialized places such as The Yellow Chilli, Gourmet House, Bab Arabia and, of course, Cafe Mojo have come up on top due to their focussed cuisine.⁣ ⁣The verdict of the Trivandrum public is simple: Give us specialized good cuisine. Quality in one type of food trumps a platter of many.” says Nithin.

The growing concern over healthy lifestyles has prompted people to switch over to clean eating habits. Places like Green Habito near Technopark and Palayam & Raw Squeezed at Sasthamangalam sell premium cold-pressed juices, salads and soups known for detoxifying the body. Prominent cold-pressed juice makers Raw Pressery have also begun selling their juices at most of the supermarkets in the city. The popularity of the Ketogenic diet among people helped ventures like KetoRepublic & KetoKitchen sprout in the city.

There’s an increasing urge among the people of Trivandrum to try out various cuisines. Taurus Zentrum mall in Taurus Downtown Technopark will have a multitude of internationally & locally known restaurants that can cater to a diverse audience.