Kerala in International media during COVID-19

2020 saw the rise of a pandemic named Novel CoronaVirus or COVID 19, that brought the global economy to a standstill and tested the efficiency of the world’s healthcare system. Different countries responded differently to the pandemic by adopting various containment and mitigation methods; by bringing in lockdowns and restrictions like closing schools and markets, banning public gatherings and transportation. Despite all these restrictions, the infection spread kept on increasing around the world. And the spread was beyond what the existing healthcare systems could manage. 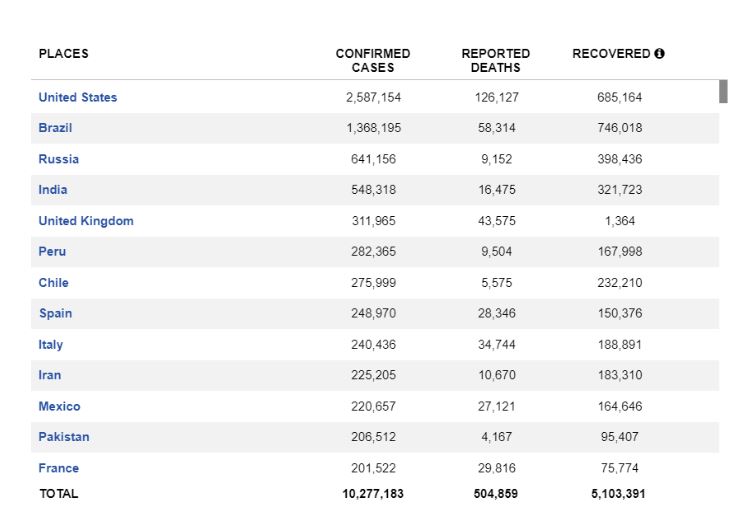 More than 200 countries across six continents were severely hit by COVID-19, affecting more than 10.3 million people & claiming lives of more than 5 lakh people. The outbreak impacted more than 80,000 people in China initially and then went on to affect countries like the USA, UK, Italy, Spain, Brazil and the Middle East. The USA currently has the highest number and one-third of the number of cases in the world, with more than 2.64 million confirmed cases, 1,26,127 deaths & 685,164 recoveries. The total number of cases in Europe crossed the 2 million mark, with Russia being the most affected country, followed by the UK, Spain and Italy. India is the fourth most affected country, with more than 5 lakh confirmed cases and 16,475 deaths.

If one were to look at the population density of these countries, America has an average of 92 people per sq mile, the UK with an average of 281 people per sq km, Italy with an average of 206 per sq km, Spain with 94 per sq km, Brazil with 25 per sq km. And despite not being so densely populated, the virus spread uncontrollably in these countries. India’s southernmost state, Kerala, has an average population density of 859 per sq km, the third-highest densely populated state in the country. And it’s one among the reasons why Kerala, is being hailed on international media for its fight against COVID-19, along with its decentralised public healthcare system and tight surveillance mechanism.

It was Rajdeep Sardesai of India Today, who quoted ‘What Kerala thinks today, India must think tomorrow’. And he was indeed right as Kerala went into a lockdown even before the India government announced one. Kerala was the first state to register a COVID19 case in the country, on January 30, from Wuhan. From then on, the state adopted tight screening measures across all airports, and institutional quarantine facilities were provided to all those who showed early symptoms of the virus. Aggressive contact tracing, quarantining, testing, isolating, treating was the process that was implemented, which helped Kerala to contain the virus and flatten the curve in the first phase.

Kerala is being lauded all over the international media for its effective pandemic crisis management. The ‘restrictive but humane approach’  by the Kerala government is widely being celebrated by world media across various languages. More than 50 international mediums across 19 countries featured compelling stories on Kerala’s fight against the pandemic. The prominent media were

It was interesting to see how The Guardian referred Kerala’s health minister KK Shylaja to as ‘The Corona Virus Slayer‘ & Chief Minister Pinarayi Vijayan as the ‘Andrew Cuomo of Kerala’ by South China Morning Post. A news article by Vijay Prashad & Subin Dennis from Globetrotter was circulated across various international media in different languages. Interestingly, Kerala was featured by mediums across various non-English speaking countries as well. BBC & BBC world news even featured live video interviews during news bulletins with the health minister, that was immensely celebrated on social media platforms. Some aspects credited by the international media were

Health Minister KK Shailaja was one among the several world leaders invited to speak on the occasion of United Nations Public Service Day.

It is not the first time Kerala is facing an unprecedented crisis, especially when it comes to handling a healthcare crisis. In 2018, Kerala reported South Asia’s first case of Nipah virus, which had a fatality rate of 75%, that claimed the lives of 17 people. But the timely and relentless response of the health department, could bring down the number of deaths and contain the virus from spreading to other districts.

And it’s not accidental that the ‘Kerala model’ is being celebrated. Over the years, Kerala has invested hugely in socio-economic development and public healthcare. The state has been consistently scoring on human developmental indices and has achieved significantly in education, literacy, healthcare, low infant mortality, low birth rate, high life expectancy. Kerala’s COVID-19 mortality rate is 0.5% against the national average of 3.4% and the global average of 6%. Together with the relentless efforts of all health workers, effective communication, awareness strategies and community participation are how Kerala continues to fight COVID-19 pandemic.

The battle against COVID-19 is not yet over, and there are still many challenges ahead. Kerala has taken the fight against COVID-19 to the next level, as lockdown relaxations have come into effect and the state’s expatriate population around the globe have started returning in large numbers. The infection spread rate has been on the rise since the last few weeks in Kerala. Still, the state government’s effective awareness strategies and tight screening measures, along with community participation, has helped in limiting the number of direct contact cases to 15%. Ultimately, what imparts hope is the government’s vision and its ability to turn each crisis into an opportunity.